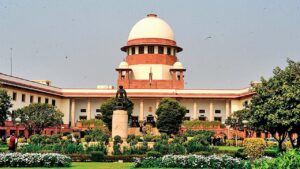 An appeal challenging an order of the National Green Tribunal (NGT) which sets aside the Environmental Clearance (EC) is filed. It takes account of a private builder for constructing a group housing near a metro station of the state. The Supreme Court sought a response from the Ministry of Environment, Forest and Climate Change (MoEF) and Delhi University (DU).

Hearing the plea on Monday, Aug 29 filed by the builder of Young Builders Private Limited (real estate firm). A Bench consisting of Justices SK Kaul and Abhay S Oka issued notices to the MoEF and DU. The Bench said, “Issue notice to respondents returnable in six weeks,” as mentioned in a PTI report.

The firm stated that EC have been granted without proper evaluation while challenging May 31, 2022 order of the NGT. Earlier, a plea by DU against the grant of EC by the MoEF was bought before NGT . Wherein the firm asks for a built-up area of 1,37,879.64 square metres which serves the University of Delhi North campus area and the Delhi University Stadium at Cavalry Lane and Chhatra Marg near the Vishwavidyalaya Metro Station.

DU’s plea claims that no serious study on the carrying capacity of the recipient environment to sustain such a mega project in Delhi. The area is already facing challenges regarding clean air and waste management. It will have an adverse impact on flora and fauna and groundwater, traffic management, the NGT stated. The NGT had agreed with DU.

Further, it had added that the project proponent failed to disclose correct and complete information, withheld relevant information and violated provisions of Environment Impact Assessment (EIA) 2006, hence was liable to face consequences as per the provisions of EIA.