“Oh! I’ll do it later. The assignment has to be submitted next week. I have lots of time. Why bother ‘now’?”

Well, this is very common among procrastinators around the world. To elaborate further, the ‘assignment’ here is a metaphor for the various tasks one is supposed to perform in the course of a day, a week or more; while ‘later’ stands for the fantastical time that nobody has ever beheld and has no possibility of beholding until one begins to inhabit ‘Mars’ maybe.

So, sitting comfortably on my bed and staring at the walls of my room with a stupendous level of concentration, the fact that I had an exam in less than twelve hours with more than half the syllabus still untouched reminded me of how lazy I am. Realisation dawned on me,making everything crystal clear. And thus came the revelation that what breeds procrastination is Garfield’s very dear friend…’laziness.’ 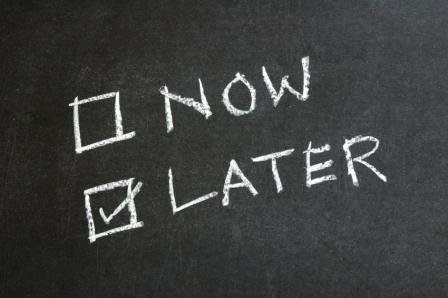 A fact which the statistics of my personal rumination revealed is that the most favourite hobby of the lazybones is to get in bed and dive into a deep pool of sleep. To sleep for ten more minutes seems like a very simple a prospect. Just ten more minutes in a day of twenty-four hours. Negligible, isn’t it? Well, not really. When this “only ten more minutes” goes on to become thirty, and then sixty, and so on and so forth, one doesn’t even begin to realise the gravity of the situation before ending up sleeping throughout the day.

Moreover, ten minutes of useless sleep every day, is, in short, a sheer waste of time. These ten minutes are precious time,the very same time, which according to an old saying, waits for nobody.

So, coming back to the point every time one feels lazy and depends upon ‘later’ that never really comes , all one needs to do is to count to five, get up and get going. Also, common sense says that doing it ‘later’ makes nothing easier than before.

So, dear procrastinators, pull up your socks, count to five and Do It Now.