Education must be a Right for everyone living in this world. So, the Right to Free and Compulsory Education Act (RTE) for children is an Act of the Parliament of India adopted on August 4, 2009, that specifies the mechanisms of the importance of free and compulsory education for children aged 6 to 14 in India under Article 21a of the Indian Constitution. The Act went into effect on April 1, 2010; India became one of 135 nations to make education a fundamental right for all children. 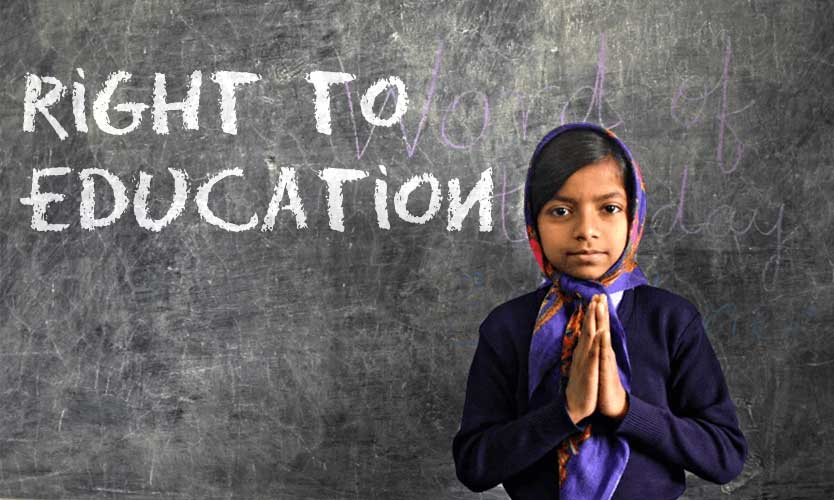 Why is Right to Education Important?

Education benefits us in numerous ways, but most significantly, it enables us to think, question, and see beyond the apparent. It is the finest approach to quench our curiosity without quenching our urge to learn and explore more. Education enables a person to think while avoiding the illusions of superstition and other religious ideas prevalent in our culture.

It also generates huge economic dividends for a nation and aids societies in achieving long-term peace and progress. Education is essential for the realization of all other human rights.

Less than half of India’s youngsters aged 6 to 14 attend school. More than one-third of all students enter the first grade and complete to grade eight. At least 35 million youngsters between the ages of 6 and 14 do not attend school.

In the age between 5 to 9 years, 53% of females are illiterate. Primary education would be universal and publicly funded in an ideal society, and all children would be able to attend regardless of their parents’ means or inclination to pay. The rationale is straightforward: when any kid fails to develop the fundamental abilities required to operate as a productive, responsible member of society, society as a whole—not to mention the particular child—loses.

The expense of not teaching children outweighs the cost of educating them. Adults who lack fundamental skills have a more difficult time finding and escaping poverty. Education for females offers notably distinct societal benefits: educated women have better salaries and lower maternal and newborn mortality rates because they have greater personal flexibility in making decisions.

Article 21A (Part III) of the 86th Amendment Act (2002) intends to make free and compulsory education a Fundamental Right for all children aged 6 to 14 years.

The finance and planning committees rejected the Bill due to a lack of funding, and a model law was given to states to make the required provisions. (States had previously complained of a shortage of funding at the state level after the 86th amendment.)

Both Houses approved the Children’s Right to Free and Compulsory Education Bill 2008 of Parliament in 2009. In August 2009, the President signed the bill into law.

The RTE Act and Article 21-A go into effect.

Why do you think the Right to Education Act is needed?

Education is an important part of our culture. It is a prerequisite for our political system, as well as for our technological society. A well-educated population is perhaps more important to our infrastructure than passable roads or potable water.

Without an educated citizenry, we cannot have a civilization worthy of the name. It is a basic human right.

The 86th amendment to the Constitution made education a basic right in 2002. The Union Cabinet approved the Right to Education Bill six years after an amendment to the Indian Constitution was enacted. The Bill’s key elements include a 25% reserve in private schools for underprivileged students from the neighbourhood at the admission level.

The government will compensate schools for expenses paid; there will be no gift or capitation charge on admission, and there will be no interviewing of the kid or parents as part of the screening process. The Bill also forbids physical punishment, expulsion, or imprisonment of a child and the use of instructors for non-educational activities other than the census or election duty and disaster assistance. Running a school without authorization will result in legal consequences.

The Right to Education Bill is the enabling law to notify the 86th constitutional amendment. Which grants the right to free and compulsory education to all children between six and fourteen.

However, on April 12, 2012, the Supreme Court upheld the constitutional validity of the Right of Children to Free and Compulsory Education Act, 2009. It directed all schools, including privately run ones, to provide immediate free education to students from socially and economically disadvantaged classes from class I until they reach the age of 14.

The court dismissed the challenge by private unaided schools to Section 12(1)(c) of the Act, which states that every recognized school imparting elementary education, even if it is an unaided school that does not receive any aid or grant to meet its expenses, is required to admit disadvantaged boys and girls from their community.