Even though DDMA (Delhi Disaster Management Association) has finally allowed Colleges and schools in Delhi to reopen from 7th February, there is no information regarding the opening of Delhi university and other central universities.

The Students Federation of India (SFI) organized a protest over the reopening of Delhi University today. According to a press release by the student body, over 400 students gathered at the call of SFI to ‘gherao’ the VC Office today from 11:00 am. The students demanded the reopening of Delhi University. SFI also stressed upon the provision of scholarships to kids who had to drop out due to worsening economic conditions in their families is also a necessity, and should be arranged by the government. 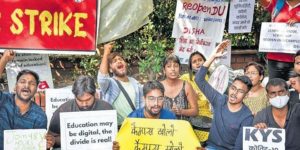 “…Students enrolled in colleges and universities have undergone immense difficulties in pursuing their degrees in the past two years. Lack of classroom interaction, physical access to libraries, and reading spaces have created inexplicable hurdles for the students. This has also led to a range of mental health problems for them. Thus, we demand that all colleges and universities across Delhi, including the ones under the central government, be reopened by Monday, allowing students to avail the facilities of their educational spaces physically. It should also be ensured that hostels are opened immediately to enable students to come back to Delhi as soon as classes resume…”

Additionally, the protesting students hung an ‘Out of Service’ placard over the gate of the VC office compound while other student and teacher organizations extended their support to the protest, SFI informed further. The students’ body has also alleged that female SFI activists were harassed by the police. Additionally, students locked the gate of Delhi University, VC from inside and claimed to “let VC feel how we feel.”

Further, the students’ body announced the commencement of ‘Sadak pe Kaksha’, or ‘classroom on the street’ from February 9, till the Delhi University is reopened. ‘Classrooms on the street is a message to the administration that both teachers and students want to begin offline classes,” said Abhishek the co-convenor of SFI DU.

“If they have any respect left for us, they should open the classrooms immediately,” he added. – Source: India Today 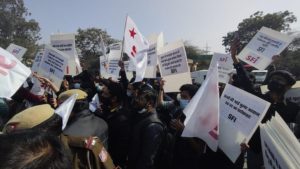 According to reports, on the request of DU Authorities, some SFI /AISA Protestors were removed from outside the VC Office by Delhi Police at around 7:30 pm and were immediately released when the premises were found vacated. The Delhi University administration had sought police assistance in getting the premises vacated by the protestors in writing. It was also reported that an adequate number of women police personnel were present to handle the female protestors. Many protestors had vacated the premises on their own except a few who were removed from the premises, while no detentions were made as per further reports. 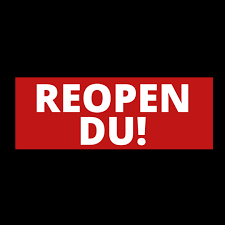 Most students are not surprised by how things have turned out. Private colleges have been consistently functioning on and off between every wave, while DU students juggle between disappointment and online classes.

As a Delhi university student myself, I understand the aggression & rage of the protesting students. Online classes were supposed to be a substitute and not an alternative to physical classes. Every student whether from Delhi or out-station is facing the same problems like lack of interaction during online classes, long hours of staring at our devices & a sedentary lifestyle.