The National Aeronautics and Space Administration (NASA) in the United States of America created quite the flutter on social media recently after they shared photographs of individuals who had received an opportunity to pursue an internship and the space research agency.

While inviting interns for internship, NASA shared the photograph of one of the interns named Pratima Roy, an Indian American, along with others and it is her image that has caused the flutter.

In the image Pratima was showed with Murtis of Hindu Goddesses on her table and the wall plastered with photographs of Hindu Gods and Goddesses.

An innumerable number of trolls targeted her criticizing NASA for including such a “stereotypical” image of Indians according them. But is it okay to bash someone at this extent because they follow a particular faith or religion? The girl undoubtedly secured a place through her efforts and a futile, good for nothing crowd directly mocked her as a fake science-lover only because she believes in her Gods. If atheism was a criterion to get selected in any scientific organization then people should also nullify the work and contributions of Einstein, Newton and Darwin.

It is so shameful to read the tweets and realize how much hatred and Hindu phobia is prevalent in our society. 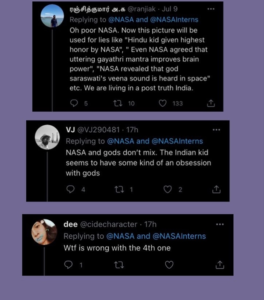 Some of the tweets read ‘She missed Lord Ganesh and 33 million other Gods’, ‘NASA and gods don’t mix. The Indian kid seems to have some kind of obsession with Gods’. Other tweets are too vile to read.

Another user very accurately pointed out “All those mocking her: Hijab, child marriages, Niqab, prayers on road, etc. are supposed to be respected under the concept of ‘choice’ and ‘pluralism’ but a Hindu lady practicing her faith has to be ridiculed. Carry on! Your bigotry will make her faith stronger.”

After the debate started, many users came in support of the girl in the comments section, by saying they were completely okay with the fact that the Indian NASA intern had Hindu idols beside her.